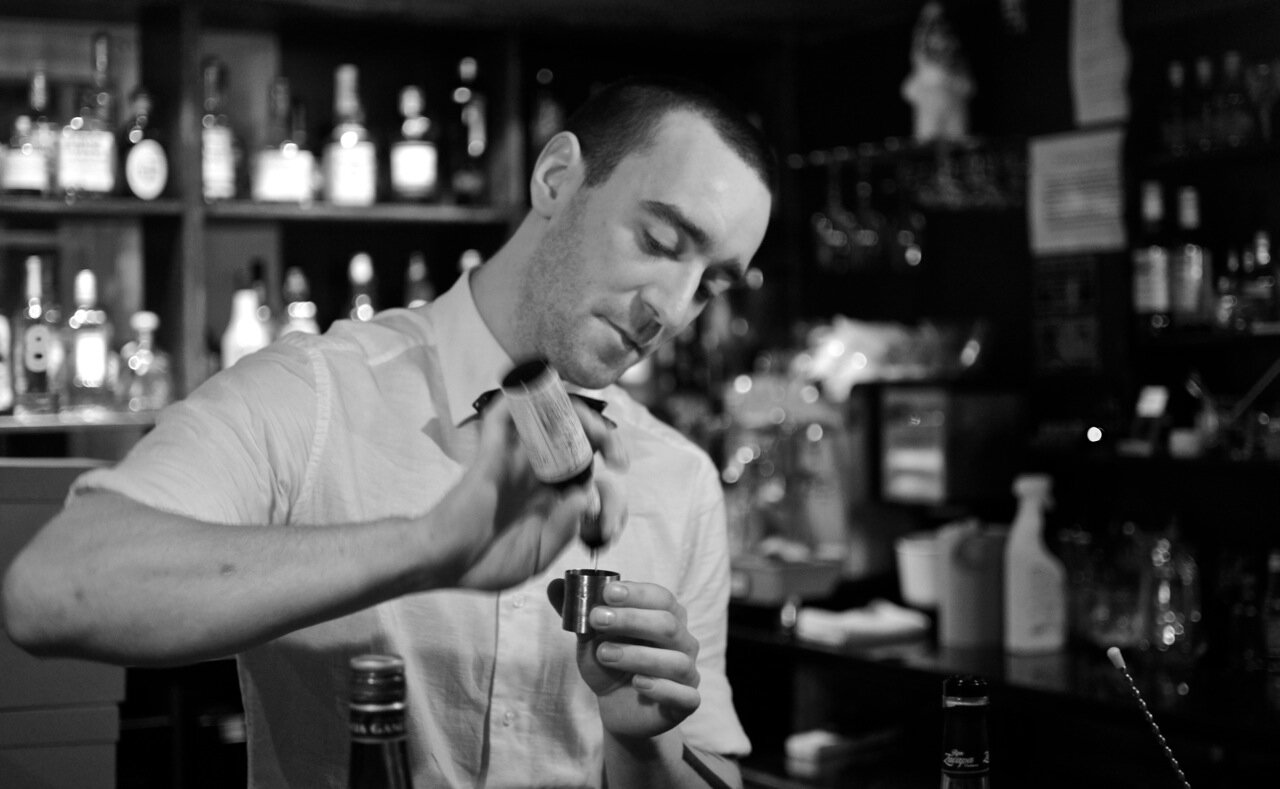 It’s been a very exciting couple of weeks building up to the announcement of our latest project – Dandelyan. A new bar in London, but details are still hush hush on that.

That hasn’t stopped us pushing ahead with all things White Lyan. The bar goes from strength to strength, and we’re constantly adding new creative developments. In fact, there’s some new developments that will really add to our plan of executing heaps mad shit. Expect bigger, expect different; More exciting things soon.

As with any new development in a bar though, it pales in comparison to new blood. And we’re really excited by our newest member. Robin Honhold previously of the highly regarded Lucky Liquor Co., and the best bar around – Bramble – joins the White Lyan team as venue manager. Having covered stints in Melbourne and Philadelphia and bringing the attention only a degree in Maths can do, we’re super excited to bring his attention to the set up of White Lyan. Of course, Iain and I will be very much on hand, Robin’s arrival simply allows us the chance to develop many of the ideas we’ve not had the chance to, with the added benefit of his unique insight.

Now, if there was ever an award for “World’s Best Bar Team”….

It’s worth clearing up, as there’s been a lot of articles stating details about my educational background; I don’t have a science degree. My studies took me from school via catering college, art college, biology onto a masters in philosophy and from this I took a huge wealth of experience and several lovely pieces of paper, but only one was a degree. That said, both the arts and the sciences have been a huge part of my life. I am very much a scientist and very much an artist.

I loved studying (if it wasn’t so expensive and self indulgent, I’d still be at university) and it is something I continue to do on a daily basis. My reading takes me through a whole host of materials, and I’m very grateful my background allows me to feel at home in many different subjects.

Unfortunately many academic papers are written in a manner that directs them to those versed in their style and format. It’s not a snobbish thing – it’s a requirement for peer review for many papers – but having grown up studying these, I actually not only take a great deal from them, I enjoy it.

The same goes for arts papers. Although they follow a different format, they have a particular style. There’s no secret to reading them, but I know several friends don’t have the patience for it, and I am aware that much of the terminology can be opaque for those new to it.

I was always looking to find a path that balanced my interests in the arts and the sciences. To me they were never separate. Much like with the business notion of ‘circles’ and ‘squares’, I don’t believe creatives can’t be practically minded, and I don’t believe scientists aren’t creative.

Creativity is part of being human -we are natural problem solvers – and this in turn is what makes us practical. Sure, some people lean in different ways, but I have always found a big part of me is in both camps.

Bartending is my perfect medium for this expression. It allows me to apply my creative and scientific interests in a way I always wanted. In fact, I don’t think there’s too many fields that would’ve allowed it as much as bartending does – particularly in the modern day where the boundaries of our trade have blurred so much.

However, this isn’t an empty statement. My background in arts and sciences does go beyond being an interest or a hobby. It was a very practical application and I spent many years in the study of both, even though I do not have a degree from each aspect of my studies.

The sciences (both biology and philosophy) taught me the necessity of safety, observation and the principles of soundness. This has been invaluable, and it is still the points I stress the most with the advent of ‘modern’ bartending. There are many techniques and ingredients available to us that need to be administered with a knowing hand. That’s not to say we need science backgrounds, but a huge amount of research needs to be done before you start playing around with chinchona or a rotovap – working simply on flavour will end up with someone dead if trial and error is only applied.

Similarly the arts side plays a huge role. One of the drinks many have stated was my most ‘sciency’ – The Living Cocktail – which employed microbes to create the flavour structure was borne from a concept and the idea of completeness. I wanted something that removed the bartender’s hand; creating something that evolved and morphed but was at the mercy of something living and subject to its surrounding. It was as much about exploring the boundaries of how we make drinks as it was about the flavours itself.

So no, although I’ve spent many years in education I do not have a degree in biology. I will however continue to study and enjoy it, and with my interests in the arts, it’ll continue to influence my work. There’s a couple of projects coming up too that will perfectly demonstrate this.


The future of Mr Lyan

I was fortunate enough to attend a seminar hosted by the lovely folk at Bacardi in New Orleans where Jim Meehan gave a rousing seminar. Jim has been one of my favourites in the industry for a long time. Not only for the bar he keeps and his input to the industry but also for his lack of bullshit. Alongside many of my mentors – Craig Harper, Mike Aikman, Jason Scott and Ian McLaren to name a few – this has been a defining feature; clear, unbiased and grounded guidance.

One of the points he raised was the difference between chefs and bartenders. It’s a point that many have discussed in recent times. There’s obviously many crossovers, and many bartenders – myself included – are taking pointers from the kitchen. We’re also trying to achieve the same respect and recognition that chefs currently enjoy. However, what’s also often said is how chefs cater to a very real need – that of sustenance and fuel – whereas we as bartenders simply provide a means of luxury and escapism. It’s a point that’s jarred with me. Of course we don’t need alcohol, but similarly we don’t need fois gras or pig fat ramen. Alcohol has evolved alongside us for many years. At one point it was a necessity. However, the main point aside from the argument towards the merits of alcohol (another time) is the fact that this takes the wrong viewpoint of drinks to me. Luxury food is a luxury. We have strived for comfort and thankfully fewer of us are starving nowadays. We can enjoy our food; Sustenance is not the primary goal. Similarly, getting loaded shouldn’t be the primary goal of cocktails and fine drinks. Of course it does provide a necessary escape every now and again, much like that double helping of clotted cream ice cream after a big meal, but the focus is the enjoyment. Food and drink are social billings. We as bartenders are doing exactly the same as a top chef.

The main point he raised however was that of social enterprise. There are so many talented people in this industry. I’d argue given the nature most people fall into it, I’d say there’s a wider range of talents in food and beverage than in any other industry. There needs to be so much more scope to explore this talent.

This was very much a motivation underpinning the Mr Lyan projects. One of my hopes for White Lyan and its concept wasn’t to alienate the industry and traditional drinks practice, but to generate a discussion. My objective going forward was to challenge convention and explore as many things creatively as I could. However the key part to this was the people that I’d bring on board. To me this industry has always been about the people who are part of it, and I’m honoured to have some of my peers I respect the most as part of this. Many of you will know Iain Griffiths who is currently working like a jacked up energiser bunny to get White Lyan together, but I’m similarly honoured to welcome Geoff Robinson and Nathan O’Neill as part of the Mr Lyan team going forward. Expect many more fun things and lovely people soon, but as before, we’re staying hush hush for a little while longer.

My discussion with them was very much that we’d do things differently. Mr Lyan as a platform is very much about an honest and open discussion and we hope to be able to work with a plethora of different industries, but the goal is to also challenge the trajectory and longevity of working in this industry. We are a young company, but this is very much part of the founding ethos. We need a better tag line, but I think it does sum a lot up; do heaps mad shit.

We’ going to try and push boundaries, explore what we think we understand and try to understand much much more. If you’re interested in taking on these challenges, please get in touch: [email protected]

After a load of secrecy, a little more info – I came up with this project a while ago, when I started to question why the bar set up was the way it was – standardised across every type of program around.

I’d been researching lots of different techniques, and I still had no answers. And neither did anyone I asked. But everything was still taken as gospel. If I questioned something, the answer was always “that’s the way it’s done”

No one questioned the level of dilution for each drink, or the consistency.

No one questioned the actual resulting water in the dilution:

And have you tasted the melt water from ice? It tastes like shit, and makes up a potential 25% of your drink.

Temperature of serve was also the bitch. The temp curve, the body, the opening…

And we all know how shit citrus is in the UK, and how inconsistent it is. AND, how many other acidic agents there are… But the nerdistry is an aside.

Most of all, it was weird how far we’ve fallen from the purpose of a bar; Good folk, and good times, supplemented by good drinks, not centred around the notion of good drinks.

So, lovely peeps, we can finally present our bar through which we wish to covers all this, and so so much more.